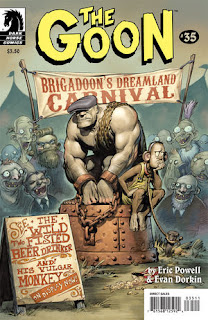 First thing: whiskey pinatas should be real.
I had to put that out there. But the Goon
And Franky don't get whacks 'til late. I'll deal.
Instead they find a carny, Brigadoon
It's called (it's crying for a sonnet, no?).
They're hunting a small freak who made them crash.
Meanwhile, this show is for the freaks, who go
All out to gawk at "normals" and a stash
Of "normal" pieces. What sells this for me
Is Franky's dialogue, and easter eggs
From Dorkin's pencils. You have got to see
Those for yourself, for this comic, it begs
Close scrutiny. The mayhem's off the scale!
And, of course, super-wrong, yes, without fail. 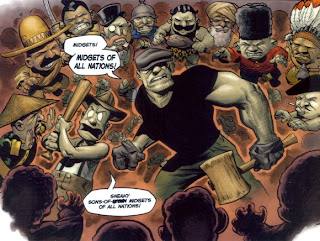 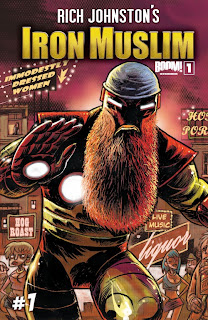 Avengers parodies are all the rage!
Good thing I've seen the movies, though, for I
Eschew these comics. Still, I turn each page
And laugh anew. Al Stark is just this guy
In old Iraq, who has now to pretend
Fanaticism, all so he can make
His bombs and gadgets. Of course, he can bend
All to his will, can even go and take
A drone for parts to pimp his metal suit.
His backstory is funny but the tale
Of killing Lady Liberty's a hoot!
And speaking of the movies, one can't fail
To note a certain cynicism re
The exploitations on the screens we see. 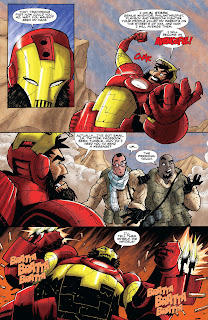 Posted by Kate Sherrod at 4:26 PM No comments:

ATOMIC ROBO: THE FLYING SHE-DEVILS OF THE PACIFIC #1 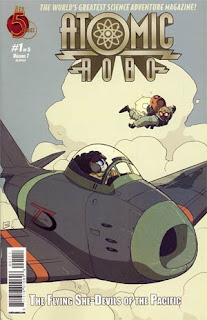 The pulp's gone airborne! Here we have jetpacks
Made out of surplus gear from World War Two,
An airship, dogfights, mystery attacks
All up there in the clear and filmy blue.
A sly allusion to the unmanned drones
The U.S. likes to send, may, too, appear
(Though I might be projecting). If your jones
Is for the skies, our Robo has you, fear
You not! Oh, and our foe is girls, whose flight
Seems to astonish Robo, though his awe
Is for their gear. And Hazel, Lauren might
Just steal your heart (or punch you in the jaw).
They salvage death machines, to keep them out
Of evil Axis hands (hint: not a kraut). 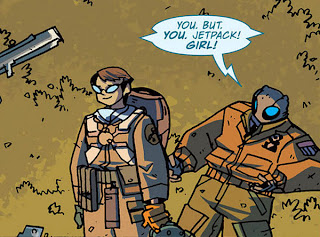 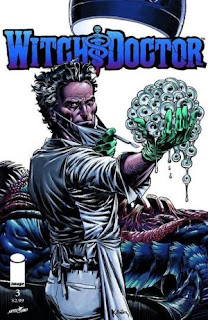 How can such beauty be so freaking sick?
"The Patient from the Black Lagoon" is slabbed
(And gorgeous). Penny wants to do her trick
(She likes to eat those monsters) -- have I grabbed
Your fancy yet? Well, it's a Deep One, too!
Straight out of Lovecraft! Watch our Doctor get
All nerdy on the subject, crying "Ooh
His lungs are gone!" The chance for to dissect
A magic benthic dweller -- would you not
Geek out just like he did? Is it his fault
Things turn out badly? Poor wee Penny's got
So peckish... fetch some vampires from the vault!
Meanwhile, Cthulhu's tapeworms! History
Has ne'er been told so well, if  you ask me. 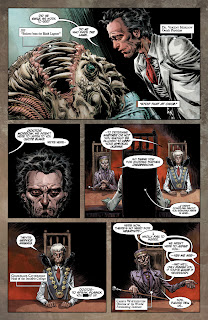 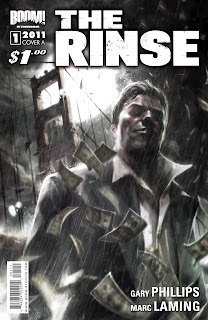 The weight of dirty money is extreme;
To clean it takes all our man, Jeff, has got.
These densely inked and colored pages seem
As complex as the dense, absorbing plot.
The baseball metaphor is apt; our man
Is cerebral e'en for this kind of crook.
That's not to say your crime and action fan
Won't find what she is after in this book.
There's chases, punch-outs, one hellacious twist
And this is the first issue! So I'll say,
I'm glad (belatedly) that my pull list
Had this one on it. Oh, and by the way,
It looks fantastic! Darrin Moore, huzzah!
Those colors warm it up, fill me with awe. 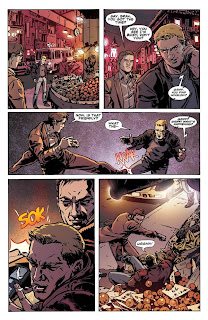 Posted by Kate Sherrod at 11:57 AM No comments: 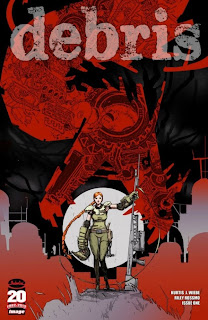 When Kurt & Riley make a comic, I,
For one cannot resist. This time the art
Is less impressionist than GREEN WAKE. Fly,
You cyber-chicken things! Be still my heart!
The jormungand are coming! They're the most
Apparent threat, but not the only ones.
Our hero, Maya, spears them in this post-
Apocalyptic world, but this tale runs
More subtle than the action might suggest.
The last tribe in the last town -- we have known
This story ere this comic, but the best
Tropes do appear a lot. What makes this pwn
In part, though, is the colors, glorious!
A Bechdel-passing heroine's a plus! 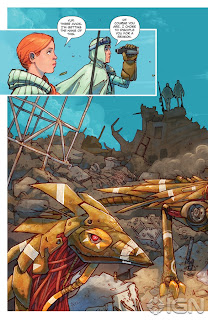 Posted by Kate Sherrod at 1:56 PM No comments: 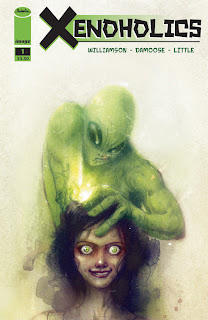 Crap circles -- and that's not a typo -- in
Times Square! For just this reason if no more
This comic's gold! Its characters have been
Abductees many times, they claim. What for,
Just like the aliens, doth vary from
Account to mad account. What these folks want
Is more than just belief, though. They've succumbed
To alien addiction, and they flaunt
Their problems in crazed meetings, like A.A.
Cartooniness abounds. They've read their Chew,
These guys, and that's no bad thing, I would say,
But I'm not sure this premise, carried through
A series, has the story legs it needs.
The characters will tell, as this proceeds. 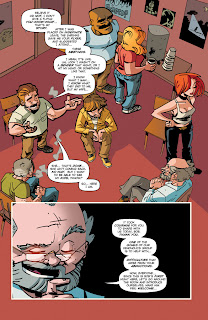 Posted by Kate Sherrod at 3:29 PM No comments:

Visit My Other Blogs!